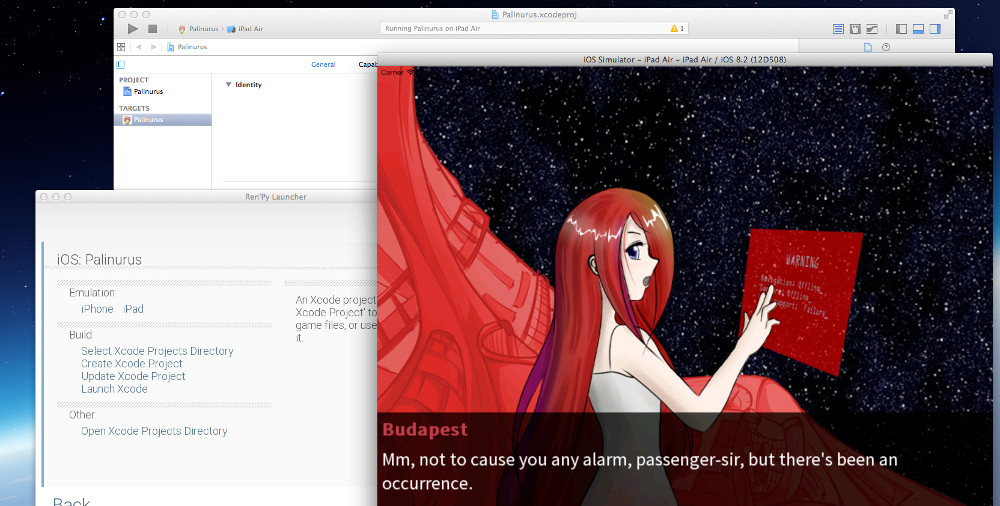 This release fixes crashes that occurred in a number of important cases, including non-ASCII directory names on Windows systems, 16-bit display depths, and display rotation when targeting recent versions of Android.

I'm pleased to announce Ren'Py 6.99 "Here's to the crazy ones." This release focuses on modernizing Ren'Py by moving to the SDL2 family of libraries. This modernization will lead to a series of benefits, both now and in the future.

This release is being managed as a rolling release leading to Ren'Py 7.0. New features may be added in point releases.

Perhaps the most obvious benefit is the addition of iOS support. Ren'Py can now produce iOS apps, targeting iPhone and iOS devices. To develop for iOS, you will need a Macintosh computer and paid iOS developer license, and will need to customize the interface to conform to iOS policies.

In addition, this release includes:

These releases also include a number of other fixes and improvements.

We'd like to thank Patrick Dawson for writing much of the code of Pygame_SDL2, a new, SDL2-based implementation of the Pygame API, and Chris Mear, who created the initial iOS port of Ren'Py that our current support is based on. Other contributors include:

When building Android packages, iOS packages, or web distributions, Ren'Py will prompt you to download RAPT (Ren'Py Android Packaging Tool), Renios (Ren'Py iOS Support), or Renpyweb (Web Platform Support). As these downloads may fail if your Internet connection is unreliable, these packages can be downloaded separately. To install, extract the contents of the archive to the Ren'Py directory. (Place the "rapt", "renios", or "web" directory into the "renpy-6.99.4" directory.)

Ren'Py Source Code: renpy-6.99.4-source.tar.bz2
Contains the source code of the Ren'Py distribution without any binary components.
Pygame_SDL2 Source Code: pygame_sdl2-for-renpy-6.99.4.tar.bz2
Contains the source code for the version of pygame_sdl2 required to run this version of Ren'Py. This may be newer than any released version of pygame_sdl2.
Other Dependencies: https://www.renpy.org/doc/html/license.html
Ren'Py contains free software licensed under a number of licenses, including the GNU Lesser General Public License. A full list of software and links to git repositories from which the software can be downloaded is linked above.