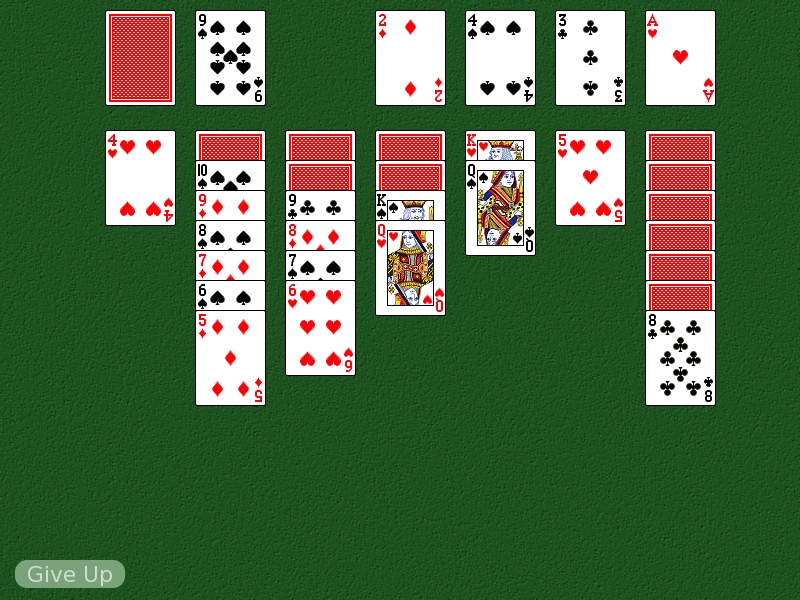 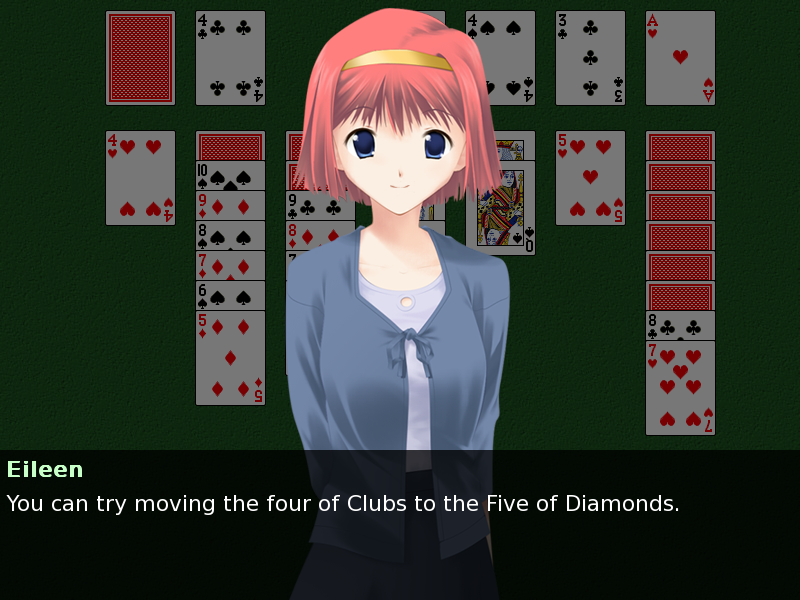 Cardgame is a framework that provides primitives for creating cardgames with Ren'Py. The cardgame engine does not actually implement any card games for you. Instead, it implements a set of primitives that are common to various card games:

Providing these primitives makes it easy to implement card games. (For example, an implementation of klondike solitaire takes 225 lines of code, including comments and blank lines.)

The latest version of cardgame can be downloaded from the frameworks page.

This software may be distributed in modified or unmodified form,
provided:

(1) This complete license notice is retained.

THE SOFTWARE IS PROVIDED "AS IS", WITHOUT WARRANTY OF ANY KIND,
EXPRESS OR IMPLIED, INCLUDING BUT NOT LIMITED TO THE WARRANTIES OF
MERCHANTABILITY, FITNESS FOR A PARTICULAR PURPOSE AND
NONINFRINGEMENT. IN NO EVENT SHALL THE AUTHORS OR COPYRIGHT HOLDERS BE
LIABLE FOR ANY CLAIM, DAMAGES OR OTHER LIABILITY, WHETHER IN AN ACTION
OF CONTRACT, TORT OR OTHERWISE, ARISING FROM, OUT OF OR IN CONNECTION
WITH THE SOFTWARE OR THE USE OR OTHER DEALINGS IN THE SOFTWARE.

Commercial licenses are also available under reasonable terms, if you wish your game to be distributed commercially. Please email pytom@bishoujo.us for details.

There are four concepts that are used by cardgame: tables, cards, stacks, and card events.

Table objects are the fundamental displayable used by cardgame. A table may have multiple stacks and multiple cards defined underneath it, and takes care of displaying cards and stacks, and producing events in response to user input.

Tables should be displayed on the master layer using the show and hide methods. Adding a table to the transient layer may lead to confused card motion animation.

Tables do not display a background image underneath the stacks. Such an image can be displayed using the scene or show statements.

Cards may be face-up or face-down. A card has two images associated with it: a face and a back. A card may either be part of a single stack, or may not belong to any stack. A card is only displayed if it belongs to a stack.

A stack represents a group of one or more cards. Each stack has a position relative to the table, and cards are displayed at offsets relative to that position. Stacks support many of the methods of a list, and also a few cardgame-specific methods. Stacks have a base image that is shown when the stack is empty.

When a table is shown and sensitive, calls to will return CardEvent objects in response to certain user operations.

A table is created with the Table constructor:

This creates a new table.

back - A displayable giving the base of stacks of cards that do not specify a more specific base.

base - A displayable giving an image used as the base of stacks that do not specify a more specific base.

springback - The amount of time it takes for cards to spring to their new location when they have been moved between stacks, or dropped.

doubleclick - The maximum time between clicks for a doubleclick event to be recognized.

A table has the following methods:

value - A hashable value that is used to represent this card.

face - A displayable that's used for the face of this card.

back - If not None, a displayable that's used for the back of the card. Otherwise, the value of the back argument to the Table constructor is used.

Declares a new stack, and returns the stack object.

x, y - Give the x and y offsets of the center of the bottom-most card of the stack, or the base of the

base - An image that is used for the base of the stack, if no cards are in the stack. If this is None, the default base specified with the Table is used.

clicked - If True, this stack will return "click" and "doubleclick" events when the stack is clicked.

drag - Sets which cards, if any, participate in drags from this stack:

drop - If True, this stack can be used as a drop target.

hidden - If True, this stack will not be shown on the screen.

Determines if this table will respond to events. If value is false, the table will stop responding to events until this is called with value true.

Returns True if the named card is faceup, or False otherwise.

Sets the rotation of the card to rotation degrees. Rotation quality leaves something to be desired.

Returns the rotation of card, in degrees.

Adds marker to card. marker should be a displayable.

Stack support some basic list operations, like len(), indexing, membership tests, and iteration. The cards are placed in the list in bottom to top order. They also support the following methods:

Removes card from the stack.

Removes the card at the top of the stack from the stack, and returns it. Returns None if the stack is empty.

Rearranges the cards in the stack in a random order.

CardEvent objects are returned from ui.interact() when events happen while a Table is sensitive. All event objects have the following fields defined: